To my surprise on my weekly trip to the Pokemon Center in Fukuoka, Japan, I stumbled upon what looked like a dark colored Mimikyu plush toy. I thought maybe I was still half asleep, but as I got closer, it hit me, this was actually a shiny version of Mimikyu!!! 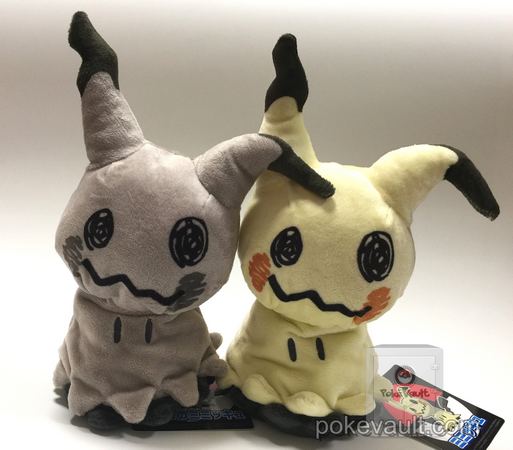 There was actually no warning of the Mimikyu release on any of the Pokemon Center websites or news sites until after the actual release. It was definitely a pleasant surprise.

My thoughts are that because Mimikyu is so popular, the release was kept a secret to help control the amount of people at the Pokemon Center at one time. It sometimes gets a little crazy!!! It was also released on a weekday and not a weekend so there would not be people fighting over them.

Mimikyu is identical to the original Pokemon Center Mimikyu, except for its grey color. Its very squeezably soft. The material is loose, just like if it were a real sheet covering Mimikyu. A great addition for any Pokemon collector. It is also made in the Philippines and not China which has been the trend for 2017.

On the same day I got another surprise, the Pokemon Center also released a new Lycanroc plush toy. This one is called “Dusk” form. Its very similar to the Midday form, but with a nice orange color instead. This was a great surprise.

I was able to buy the Takara Tomy version of the Dusk form Lycanroc a couple weeks before, but I am glad that the Pokemon Center also release one. What makes it even better is that the two versions are quite different.

On the Pokemon Center version, the legs are long and skinny but it does manage to stand up. Of course the stitching is excellent as usual with the Pokemon Center plush toys. There is alot of detail and its a definite must for any Pokemon Collector.

Of course you can still find both of these, as well as the original Mimikyu on Pokevault.com. But with the holidays fast approaching, they might not be around for too long.