Last week I bought an Umbreon plush toy on what I thought was a reliable website. Unfortunately as it turned out I was very disappointed. When I purchased the Umbreon, the seller told me to be patient as it was coming from overseas. Overseas? I am in Japan. Why would a Japanese Umbreon plushie come from overseas when they are only sold in Japan. When I got the package, I knew before opening it up that it was a bootleg or fake. The package was sent from China. China and Hong Kong are the two countries that bootleg the most Pokemon toys. Upon opening it, to the untrained eye, it looks authentic. The Takara Tomy paper tag was attached and was authentic. BUT, then upon closer inspection, yep, I was right. I got my first ever bootleg. I was angry, disappointed and most of all embarrassed that I actually bought a fake. I have been selling Pokemon for 15+ years and have prided my sell on the fact that I have never bought a fake. But because there are so many fakes out there, it can happen to anyone quite easily. I had a bad feeling when I bought it and should have listened to my insticts. It was a good price and too good to be true.

So, I would like to help those of you who want to do a simple check to see if your Umbreon is authentic or a bootleg. It can be really hard to tell the difference, but here are a few tips so that you dont get ripped off.

The bootleg that I bought is one of the most common bootlegs. It is sold all over Ebay, at most anime conventions, and recently has even popped up on Amazon.

How to tell if you got one of these fake Umbreons:

The easiest way to tell at a glance is probably Umbreon’s fur. The authentic Takara Tomy Umbreon as well as most Takara tomy plush toys have somewhat rough fur. Its not the minky type fabric that the Pokemon Center Umbreon has. Notice in the picture that the real Umbreon has a more black or dark colored course type fabric while the bootleg Umbreon has a lighter dark gray, minky type fabric. But this ONLY applies to the Takara Tomy version. The Japanese Pokemon Center Umbreon plush toy (standing version) has the minky fabric. The minky fabric version was only made in the standing pose and has the Pokemon Center tags on it. So, if you have an Umbreon with minky fabric in a sitting pose with a Takara Tomy tag, you got a bootleg. 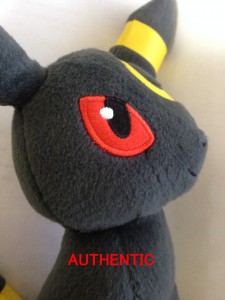 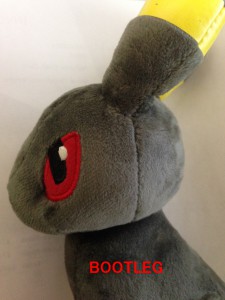 The next way to tell is the size. Although this can be rather difficult if you do not have an authentic one to compare it to. All plushies, even identical ones can vary in size slightly, but in general the authentic Takara Tomy Umbreon stands about 8.5″ (22cm) tall from the bottom to the tips of its ears. It also seems to stand up more straight that the fake one. Whereas the bootleg plushie tends to fall backwards with its front paws off the ground and measures about 8″ or 20cm if you can get it to sit flat or about 7.5″ (15.5cm) if its in the falling backwards position. 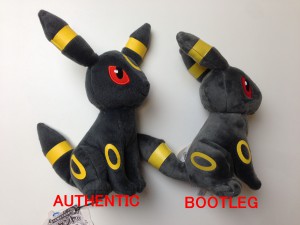 Another way to tell is the eyes. Both the authentic Takara Tomy Umbreon and the Pokemon Center Umbreon both have similar eyes. They are an orangish-red color. NOT dark red. The bootleg version has dark red eyes and often times the stitching is not very good. In addition, the bootleg version Umbreon’s eyes seem to be indented more than the authentic version. 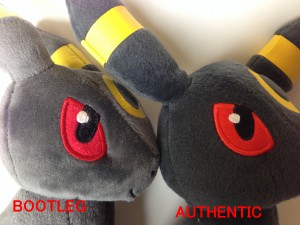 Basically what I think this bootlegger did was use the same fabric that was used in the Pokemon Center version of Umbreon and try to copy the Takara Tomy sitting version. So this bootleg is kind of a mix of the two different Umbreons. 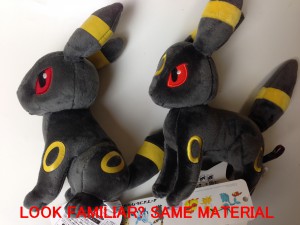 Notice when you put the Pokemon Center standing version next to the bootleg sitting version, they have the exact same minky fabric, although Takara Tomy never has a minky fabric. Its always a more course type fabric.

Well, I hope this helped those of you that want to find out if you bought an authentic plush. The same bootlegger has made all the Eeveelutions, so the same rules on how to tell apply to Eevee, Espeon, Flareon, Jolteon, Leafeon, Glaceon and Vaporeon as well. Luckily I didnt buy any of those, so I dont have one to show you a comparison, but you should be able to tell.

You can also check out our Youtube video to see the difference between the authentic and bootleg Umbreon plushies.