The newest series of Japanese Pokemon cards has officially been released today. The new series is called SM7b Fairy Rise. It is another monthly mini series that comprises of 50 cards plus 6 SR, 4HR and 3UR cards for a grand total of 63 cards. 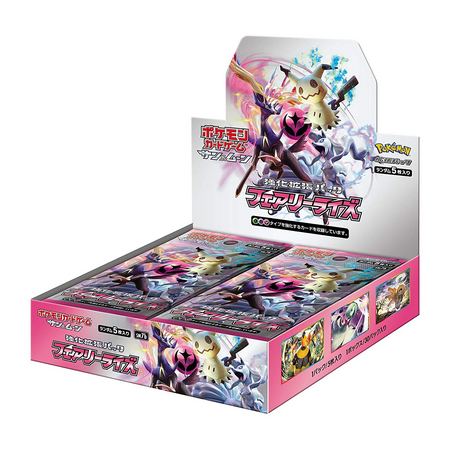 This new series features some great Pokemon characters like Alolan Ninetales, Sceptile, Alolan Vulpix, Sigilyph, Gardevoir, Ribombee,  Cutiefly and many more. Like the previous few mini sets, there are 2 prism star cards (Xerneas and Life Forest). There are also 4 GX cards (Mimikyu, Alolan Ninetales, Sigilyph, Sceptile) and the same 4 GX characters printed with different images as SR cards as well as Morty and Mina. The HR cards feature the same 4 GX cards but with a reflective prism type background and different image. The 3 UR cards have a beautiful gold border and are Net Ball, Adventuring Satchel and Spell Tag.

Currently these are only sold in Japan, but you can buy them on Pokevault and have them shipped directly to you.

There will be no English version of this set. Instead, they will be released in a giant set called Lost Thunder. It will be the largest Pokemon set in history, consisting of 210 cards. It will be a mix of 3 of the Japanese sets:

Exactly which cards will be in the set is not known at this time.