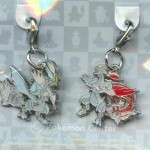 These metal charms are all about 1″ or 2.5cm tall. Made of metal and very detailed. They are additions to the existing 2011-2012 set of all 646 Pokemon character charms. Just released on July 7th here in Japan. They are sure to be a big hit!

They were only sold at the Pokemon Centers in Japan and not sold in any stores or sold outside of Japan. They were made in very limited quantity and will only be sold for a very short time. The metal charms are extremely popular in Japan and all over the world. They create mad frenzies everytime they go on sale. 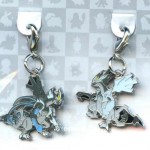 Each charm comes with a metal clip that can clip on to your keychain, bag, purse, or just about anywhere that you would like to clip it on to. I have even seen some very cool necklaces made from these charms.

For all your other Pokemon needs, dont forget to check out Pokevault. They have thousands of rare Pokemon items including plush toys, Pokedolls, charms, cards, deck boxes, dice boxes, card sleeves, playmats, keychains, straps, figures and just about anything you can think of that is Pokemon related. 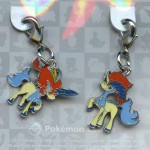 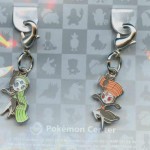 With the release of Noble Victories arriving soon, many have their eyes on one Pokemon; Kyurem. Kyurem is an ice and dragon type. In Pokemon card form that translates to water type. Ice Pokemon featured in the Pokemon Black and White sets have displayed a weakness to steel type, an attempt to give steel decks a pickup later on in the TCG season. Kyurem has 130 HP, a two energy retreat cost, and two attacks. His first attack is Outrage, a two colorless energy attack that has the same effect as Reshiram and Zekrom’s Outrage. His second attack differs from the previously mentioned dragons. Instead of having an attack that does 120, his second attack called Glaciate, which costs two water energy and one colorless energy, attacks every one of your opponent’s Pokemon for 30 each. This move is devastating, as the only downside it has is that it can’t damage the active defending Pokemon for 120. It makes up by doing a possible 180 to your opponent in spread out damage, or 210 if the active Pokemon is weak against water. This gives users a good idea of how to keep it on the field, but not only is it a good Pokemon to use as a main attacker; it also fits as a tech in other decks.

Reshiphlosion is a top tier deck that many decks have to tech for. When the Emerging Powers released, Basculin 24/98 was a clear candidate to be teched into decks to counter Reshiphlosion. It was also a common card, so getting one in a booster pack wasn’t so difficult. You had a choice between Flail, which cost one colorless energy but could do up to 70 damage; or you could use Final Gambit, which cost one water energy and a double colorless and allowed you to do 80 damage. Double both of these attacks and you have a knocked out Reshiram or Typhlosion Prime. However, there were many flaws with Basculin. For one, Basculin only has 80 HP, which gives opponents an easy revenge KO when Basculin actually defeats something. Using Flail to its full effect would have to have Basculin at 70 HP. Final Gambit has a downside of knocking out Basculin if you flip double tails. The other downside to Final Gambit is that it takes two turns to set up (three if you don’t have double colorless), and once Basculin is knocked out, you lose vital energy. Kyurem is a better Basic Pokemon that has a higher HP and better attacks. Outrage already starts off doing 20 damage, so just five damage counters will KO a Reshiram or Typhlosion. Glaciate would do 60 damage to the defending Pokemon while 30 to each bench Pokemon, resulting in massive damage pickups if your main attacker is Kyurem. If you tech it in other decks then Magnezone, Gothitelle, Zekrom, or even your own Reshiram can clean up.

Kyurem can also become a wall in Vileplume decks. Zekrom is unable to hold up the wall without damaging himself for 40 with his big attack and Reshiram is unable to hold up the wall without constantly discarding energy. Kyurem can constantly use his second attack without any negative effect towards the user. This allows for another Kyurem to set up in case a Cobalion is teched in against it. Three Glaciate attacks already does 90 to the whole bench and the defending Pokemon, so many avid players are dying to see how that transfers into real life battle situations. Since Kyurem is a basic Pokemon, it’s able to be sent out first and have you set up Vileplume later. This allows users to add more cards in that can help Kyurem out, like other big bodied Pokemon that can take over if Kyurem is to be knocked out.

Overall I see Kyurem getting a lot of play in some decks. It fits well as a very consistent Reshiphlosion counter in wall decks but fails to one shot anything unless they are babies. It won’t see any play in Yanmegazone, but for Gothitelle and Vileplume decks, it will be a healthy addition.

Eviolite is found in the fifth generation of the Pokemon games. It raises the special defense and defense of a Pokemon if that Pokemon is capable of evolving. This gave card creators a chance to insert it into the metagame. While keeping its defensive traits, this card differs from the actual item in the game. Instead of raising the defenses of a Pokemon that still can evolve, it raises the defense of all Basic Pokemon by 20 HP, even ones that do not have the capability of evolving further. This is basically a Defender card that never goes away unless the Pokemon is knocked out. This gives holders of this card many strategic applications that can further change the metagame.

A perfect insert for Eviolite is into ZTPS. Every Pokemon within ZTPS is a Basic Pokemon and would all benefit from an Eviolite attachment, although attaching to a Shaymin or Pachirisu would be quite pointless, as they aren’t your actual attackers in the deck. What this does is give Zekrom and Tornadus some breathing room against 120 attacks from Reshiram or another Zekrom that use a Pluspower to knock out a Zekrom. A smart opponent wouldn’t attack like that in fear of getting hit with an Outrage, so it does stall for a turn giving your own Zekrom the chance to Bolt Strike for 120 and add a Pluspower if that opponent hasn’t attached an Eviolite. This card might also see some play with Reshiram themed decks, although the insert might not be as strong as ZTPS considering Reshiram is the sole Basic Pokemon that attacks in those decks.

Another good example would be for wall decks. Vileplume takes away the Pluspower one would need to KO a Pokemon with 130 HP and Reuniclus spreads the damage around so that the active Pokemon remains unharmed. Techs like Magby and Kingdra Prime have shown an ability to overcome such obstacles, which have lowered Gothitelle’s playability. Eviolite won’t help Gothitelle, but it will help Pokemon such as Kyurem, Reshiram, Zekrom, Terrakion maintain a healthy wall while even being hit with burn or Spray Splash after the user’s turn. It will even help Pokemon like Cobalion and Virizion maintain walls as 140 is good enough for Kingdra but doesn’t help with Magby. It can be really deadly with Kyurem though, as steel type Pokemon haven’t received much play. Eviolite also counters Rocky Helmet, another Pokemon tool released in Noble victories which would initially damage the attacker by 20.

Eviolite won’t be seen in any Stage 1 Rush or Yanmegazone, but now those decks have to insert more techs to counter this item. Once it’s released, it should automatically be considered in your deck if you run any of the above. If not, you must consider putting a card that will counter it. Pokemon tools were just rereleased in this new set, so the only Pokemon at the moment that removes Pokemon tools is Heatmor. The upside is that Heatmor is a basic Pokemon, which means that there won’t be a clunky evolution line just to counter one thing like Kingdra Prime does. The downside is that it takes two turns to set up, as it requires two energies in order to use this attack. Typhlosion Prime’s afterburner effect allows Heatmor to gain one from the discard pile and attach, but the opponent can easily just knock out Heatmor and attach another Eviolite. Best case scenario is using Rocky Helmet mixed with a Kingdra Prime line. This gives the user a chance to hit for 10 more damage in order to expose any Pokemon with Eviolite and 150 HP that decides to attack a Pokemon with Rocky Helmet. Future sets will probably hurt Eviolite’s playability, but for now, it’s a very playable card. It’s not completely devastating, but it can affect the outcome of many battles from here on.