The Pokemon Centers in Japan are teaming up with Kaiju for a collaboration.
Kaiju and Pikachu will be joining forces and there will be 4 new plush toys. They will be the popular poncho style featuring Pikachu wearing Hydreigon, Tyranitar, Charizard & Kaiju costumes. 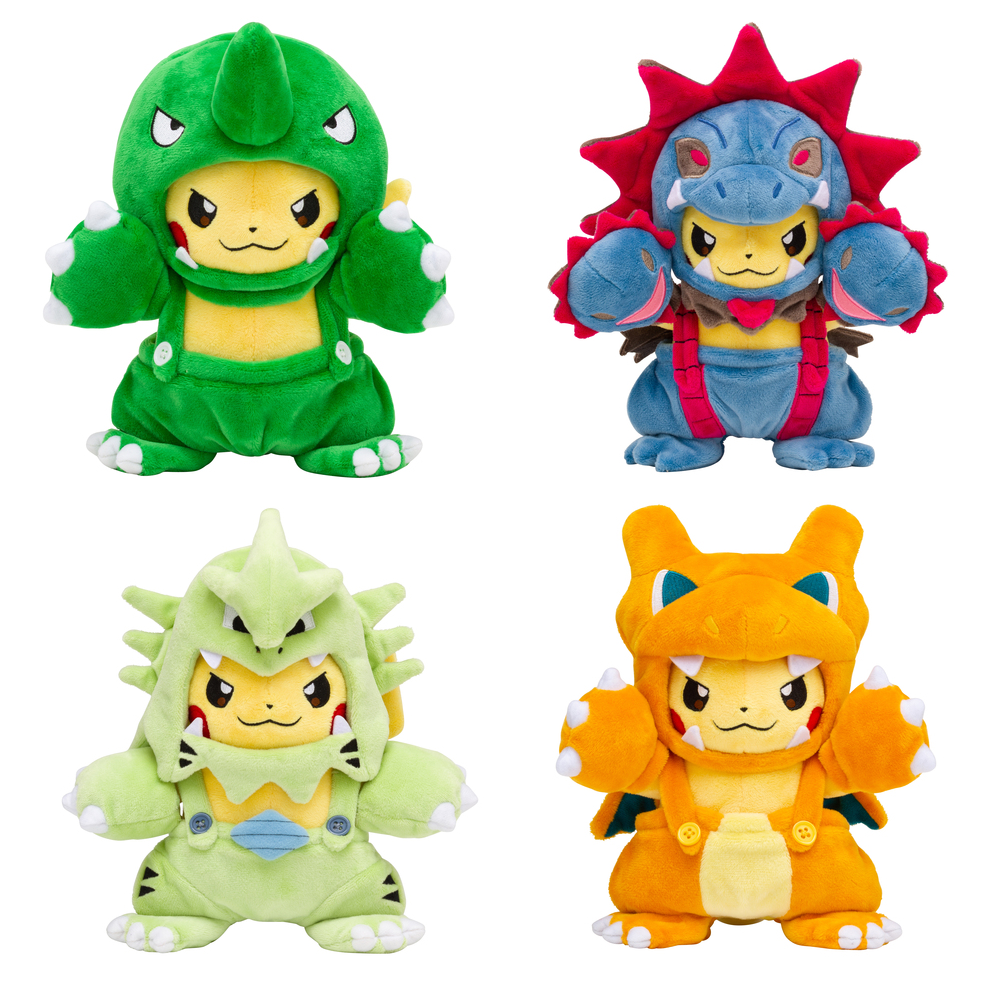 These beautiful plushies will be available for purchase on Pokevault for a limited time after June 30, 2018. They will be in short supply, so dont wait.

Alright, there are a ton of Pokemon. Different in their own way. It is really cool when you get to thinking about it. Now they all are their own species. But you might start to wonder that some of them have to be related in some way. They just look as if they can’t be passed up when compared to another Pokemon. Take a Pichu for instance, it evolves into a Pikachu. Not to mention that they have really close names, but also they look alike. Just about the same Pokemon though they are different species. An evolution may seem to be a different species but I like to think of them as a more mature and not to mention more powerful form of their pre-evolved forms. How do you evolve a Pokemon? Well there are many, many ways of doing so. You see, a Pokemon such as Charmander has three evolution stages, Charmeleon and Charizard. This particular Pokemon evolves by level up. Meaning it will evolve at a certain level, this is the most common type of evolution. And now, if you take a Pichu and want to evolve it into the famous Pikachu, level up will help, but won’t work. This Pokemon evolves by friendship. Level it up, have it hold a Soothe Bell, get it to respect you fully. Now you have a Pikachu, surprise, surprise Pikachu doesn’t evolve by level either. It evolves with an evolution stone known as the Thunderstone. You must give this stone to Pikachu whenever you feel it time to evolve it or you want to evolve your Pikachu. Another type of evolution is by trade, for instance, you may want to evolve your Machoke into a Machamp. Level sadly won’t work, you have to trade it with another person for it to evolve. A Pokemon like Onix will evolve if you give it the Metal Coat and trade it to someone.

In some rare cases you can find a Steelix in the wild at Iron Island in the Sinnoh region. Some Pokemon, like Eevee, the ruler of evolution, will evolve into Leafeon if you level it up by the Moss Rock. That is the majority for evolutions right there.

So far the current Pokemon that evolves by level and is the highest leveled Pokemon to evolve to date is Hydreigon. It is impossible to have a Hydregion below level sixty four unless it is through a Pokemon event. Evolutions bring strength but some people rather keep there Pokemon unevolved. Ash Ketchum from the anime never evolved Pikachu into a Raichu to this date. Do you like to keep your Pokemon unevolved? If so, which ones? Or do you prefer to keep your Pokemon evolved.

With every new generation to the games, there comes at least one dragon type with a three stage evolutionary line. The fifth generation came out with two, the Axew and Deino lines. Deino, though, has dragon as its secondary type and has a unique type combination that no other Pokemon outside of its evolutionary line shares.

Deino is primarily a blue dinosaur-like creature with a sort of black hair/fur covering its neck, head, and most of its face. Its neck fur is speckled with magenta spots and it has a ragged, blue tail. Deino’s and Bagon’s evolutionary lines are the only Pokemon exclusively in the Dragon egg group. According to Ken Sugimori, the Deino line was originally intended to be made up of cyborg dragons – part tank and part dragon. The idea was scrapped until late in the game where the creators decided to base the line on the Yamata no Orochi (a serpent-like creature with many heads and tails). According to Deino’s pokedex entries, Deino tends to bite everything and isn’t much of a picky eater. They cannot see, so they tackle and bite to learn their surroundings. Because of this, their bodies are riddled with wounds. Approaching it carelessly is extremely dangerous. Its name seems to come from the words ‘dino’ (a shortened version of the word for “dinosaur”) and ‘ein’ – German for “one”.

Once Deino reaches level 50, it evolves into Zweilous. Zweilous shares many physical traits with its pre-evolution, though has two heads and a wider body. Zweilous, like Deino, has the same sort of black hair covering its neck, head, and most of its face, and is primarily colored blue. It has four legs and two appendages coming off from its back that appear to be wing-like. The red marks on its stomach seem to come from its original design from when it was supposed to be a cyborg-dragon, as they’re tire-mark shaped. Alphabetically, Zweilous is the last Pokemon listed. According to its pokedex entries, Zweilous’s two heads do not get along with each other. Because of this, they compete with each other for food and end up always eating too much. After Zweilous have eaten all of the food in their territory, they move to a new area. Zweilous’s name most-likely comes from the words ‘zwei’ (which means “two” in German) and ‘jealous’ – as the two heads are known to compete for food.
END_OF_DOCUMENT_TOKEN_TO_BE_REPLACED

I am still leveling up my team, but the frontrunner right now is Hydreigon. I named him “Cuteasaur”. Dragon types, in general, are tough to train because of how much exp they require in order to level up. The Deino line in particular because he doesn’t evolve into his second evolution Zweilous until level 50, and not into Hydreigon until level 64. To put that in perspective, Gen 4’s “pseudo-legendary” dragon Gible evolves to Gabite at level 24, and Garchomp at 48.

Garchomp and Hydreigon both have base stat total of 600, both are very strong, very awesome Pokemon and no doubt would be incredibly valuable additions to any team. Garchomp, a Ground-Dragon type, is very fast with high physical attacks. Many of us curse Cynthia and her Garchomp, I know that Garchomp was the bane of my existence when I played Pearl. However, Pseudo-Legendary as he may be, Garchomp carries a 4x weakness to Ice, which is easily exploitable with the number of ice types increasing in newer gens.

Hydreigon is a little more well rounded and has the ability Levitate, making him immune to ground type attacks. Hydreigon has no 4x weaknesses like Garchomp does, but he is open to Fighting, Bug, Ice and other Dragon moves. In short, Hydreigon has more type weaknesses but they’re all 2x. Garchomp has a 4x weakness to Ice and a 2x weakness to Dragon.
END_OF_DOCUMENT_TOKEN_TO_BE_REPLACED

The Unova region features many Dragon type Pokemon, and the second evolutionary set from this region features Deino, Zweilous, and Hydreigon. These Pokemon are also some of the more difficult to evolve in the fifth generation due to high evolution level requirements. However, they have become favorites among fans and Hydreigon will even be featured in the upcoming movies.

Since only Deino is the only one of the three available in the game through regular play and is very rare, finding just one may take a good amount of time. It can only be found within the caves of Victory Road around level 40. However, the capture rate for this Pokemon is fairly high, so it should not be difficult to catch.
END_OF_DOCUMENT_TOKEN_TO_BE_REPLACED