Pokevault.com is giving away a set of 3 Pokemon Center Hiroshima Grand Opening plush toys.  One lucky winner will receive ALL 3: Karpchu, Pikados & Shiny Pikados.  The contest starts August 9, 2015 and ends on August 17, 2015 (Japan time). Its 100% free to enter and there is no purchase necessary. 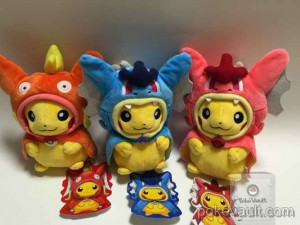 The winner will be chosen by random drawing and announced on August 17, 2015. By entering you receive one chance in the random drawing.

BUT WAIT!!!! Refer a friend to the contest and you get 5 extra chances to win. So tell everyone that you know, post it on Pokemon websites, blogs, info sites, facebook, twitter, etc. The more people that you tell about the contest, the better your chances are of winning.

The set of 3 Hiroshima Grand Opening Plushies will be sent to the lucky winner. Shipping will be paid by Pokevault.com, so you do not need to pay anything if you win.

You have all heard of the Pokemon known as Magikarp, am I correct? Well he is the strongest Pokemon in the world! No, Magikarp is actually believe to be the weakest Pokemon in the world. All he can get is Splash, a move that does nothing at all! He just splashes around! And Tackle a normal type move that does damage but is absolutely useless due to Magikarp having such an insanely low attack stat! He can get Flail later on which is a bit better if I remember right but still with a poor attack stat you can’t do anything right with a Magikarp!

In the anime James of Team Rocket got hit up by a con-artist salesman that a Magikarp is awesome and it will produce eggs, those eggs hatch and you can sell the Magikarp and keep making more money! No, nobody would want a Magikarp. He sells it for a way too expensive price. He one time even included a gold poke ball! That’s right a solid gold pokeball!

No, that is way off, it is simply a regular cheap poke ball with some gold paint on it, you probably wouldn’t be able to see James by any Magikarp these days, maybe once in a while. But it used to happen every so often back around the early seasons. For some reason James never learns, he always falls for the deals, they can’t even be called deal, it’s just an expensive Magikarp!

Anyway in some of the games, including Pokemon Black and White, they will be a man selling a Magikarp for a way to expensive price. I would only buy it in Black and White, because Magikarp can’t be found anywhere in the reason unless you buy it from the salesman. Now is Magikarp really all that bad? A shiny Magikarp is gold, does that have any points to how awesome he is? They main attraction with a Magikarp is that it evolves in the powerful Gyarados at level twenty. Gyarados is a very powerful Pokemon, and in the end a Magikarp is worth the price. Though if you get an Old Rod you can get them whenever you want one. A shiny Gyarados is red, most of you should know of the red Gyarados if you red the other articles. Magikarp is a neat Pokemon, don’t you think?

As the lights turns off, the Master is coming in a bright blue light and reveals itself to be… Mewtwo! Fergus gets irate and states that a Pokemon can’t be a Pokemon trainer. Mewtwo then uses its psychic powers to toss Fergus in the fountain. Fergus orders Gyarados to attack and use Hyper Beam, but Mewtwo deflects the attack back at Gyarados, who’s sent flying straight in the pool! Mewtwo then tells its assistant that it no longer needs her. The lady falls under Brock’s arms and turns out to be Nurse Joy!!! Mewtwo tells Brock how he abducted her a month ago, and for which purposes.

During this time, Team Rocket gets in a room that looks like a laboratory. There are three Pokemon in tubes that seems either dead or asleep. Jessie accidently sits on a button activating a video showing the cloning processus about Mewtwo. While they’re watching, pincers grabs Meowth and puts him on a rolling machine! Jessie and James manages to get Meowth out, but not before the machine takes a few hair out of Meowth’s tail. On a screen, the hair is show, transforming into a 3D render of Meowth, and, a moment later, the tubes get something new ; a new Meowth!!! Getting back to the tape, the Rockets watch everything getting destroyed in the past and the tape ends after.
END_OF_DOCUMENT_TOKEN_TO_BE_REPLACED

Hey, it’s time for another tournament report with Kohrok! This time, we have a slightly better outlook than last week. So we were at my local league where I judge, lead league, and help out. It’s also pretty much the only active league Western PA, so we’re pretty proud of that. If anyone’s interested in joining, just e-mail us at MurrysvillePokemonLeague@gmail.com

So, today I decided to bail on the VileGar from last week. Losing every game (basically) was pretty poor, and I wasn’t looking forward to more losses. So I switched to my Luxray/Garchomp deck from State Championships, tossed in some Sableye to block the donk, and got set to go. Oh, and Hoolon Mike had graduated this past month, so I gave him a Flareon EX as a graduation present because he’s an awesome person.

I got to the site early, helped AJ set up, talked to people, made some trades, and at 11:15, the event started. We had less than 10 Juniors and Seniors, but we had 14 Masters, meaning 4 rounds, top 2. This would end up coming to bite me later on.
END_OF_DOCUMENT_TOKEN_TO_BE_REPLACED

When we arrived, we were given POP IDs during registration. Afterwards, we went upstairs to sit and wait for our booster packs. We were given six Call of Legends booster packs to open. The ratio for this set isn’t as great as previous sets, as my friend and I failed to pull a shiny card, which are the ultra-rares for this set. The main cards I pulled were Feraligatr, Skarmory, and Tyrogue rares. My friend pulled a Gyarados holo and Ampharos rare that he used in his deck. Although these cards aren’t top tier deck cards, they had to suffice when there aren’t that many top tier cards within the set.
END_OF_DOCUMENT_TOKEN_TO_BE_REPLACED