As previously mentioned, the Pokemon Centers in Japan will be releasing 7 Rainbow Rocket Pikachu plushies on January 20th, 2018. 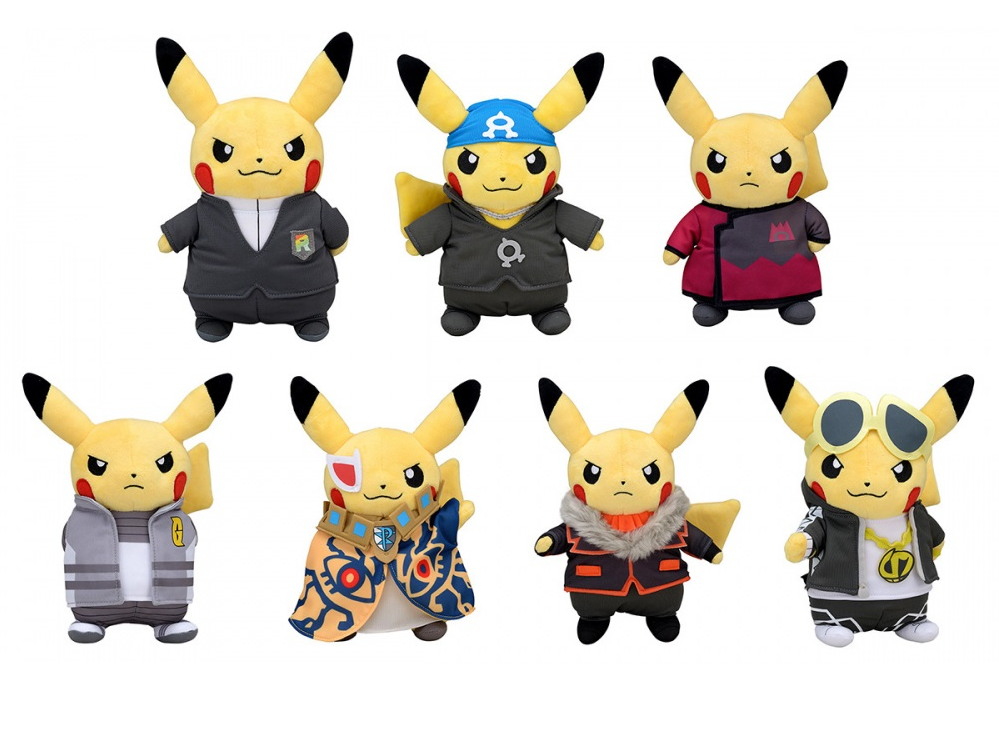 And more great news!!! The Pokemon Center will also be releasing each of the trainer Pokemon plushies as well.

These will be available on Pokevault on January 20th. These will surely be popular, so they will go fast. Lots more Rainbow Rocket merchandise will also be available.

Diane is driving everyone out across some very bumpy terrain, when Ash falls down, with May, Max and Jirachi laughs. When night comes, Brock starts cooking and May closes the ‘Day 3 of the Wishing Star’ and then join Diane in the bus. She tells her that she and Butler were childhood friends, and the last time she saw a delighted Butler was long ago, before the Groudon Project. She just wanted him as a magician, not someone with all-powerful mythology Pokemon.

Ash and Max have fun at skipping stones on the lake, and Max wins. That same night, May takes her Wish Maker then fold the panel of ‘Day 4 of the Wishing Star’. Max is getting nervous so he went to see Ash near the Lake. Ash tells him that he, too, once had a friend but they had to separate each other and they never met each other since then. But he claim his pal will be in his heart, so does will Jirachi be in Max’s heart.

The bus manges to get stuck in the mud, so everyone helps out. Afterwards, everyone is covered in mud, and all laughs. May then takes her Wish Maker then fold the panel of ‘Day 5 of the Wishing Star’. Each time she does so, Max become sad as this only tells him that he and Jirachi will part ways soon.

The gang arrives at Forina, Jirachi’s home place. Many other Pokemon lives there, such as Nuzleaf, Breloom, Tropius, Linoone, Flygon, Altaria etc… The gang is then greeted by Absol, showing them Forina. May clears ‘Day 6 of the Wishing Star’. Only 24 hours left… Max can’t get to sleep as he worries about the little thing.

Absol leads the gang to a cave, the same cave Jirachi absorbs the comet’s power and falls asleep for another 1000 years. As Jirachi was going to open his Millenium Eye, spikes comes out of the walls and purple energy beams capture Jirachi! Butler is finally gonna bring Groudon back to life. Then he sets all the machines A-OK, while Absol and Flygon breaks the spikes. Flygon takes Ash and Max to a ride, and they managed to get Jirachi back, while Butler sends his Salamence to fight agaist them.
END_OF_DOCUMENT_TOKEN_TO_BE_REPLACED

The movie “Arceus and the Jewel of Life” was directed by Kunihiko Yuyama. Arceus was depicted as being nature, the Jewel of Life as being the Sun, with the end goal of making people contemplate how the natural world is essential for the survival of all life. Ash and his friends arrive at the beautiful land of Michina. Little did they expect to once again be found in a conflict between Dialga, Palkia, and Giratina. They are saved by Sheen a girl who can communicate with pokemon.

After a small after-conflict, Arceus fully awakens and returns to Earth. Arceus sees the Jewel is fake when Sheena tries to return it. Dialga, Palkia and Giratina return to try to stop Arceus, allowing Dialga to transport everyone to the past. They are nearly killed when Arceus attacks Damos and them, but Sheena contacts Dialga to send them further back in time. Ash, Brock, Dawn, and Sheena are several hours before Damos’ betrayal.
END_OF_DOCUMENT_TOKEN_TO_BE_REPLACED

In Pokemon Ruby and Sapphire there are three starters. Torchic, Treeko, and Mudkip. I advise to go with either Torchic or Mudkip as it is hard to find a good fire and water Pokemon in Ruby or Sapphire until you get Groudon or Kyogre. Mudkip evolves into Marshtomp then into Swampert, Treeko evolves into Grovyle then into Sceptile, and Torchic evolves into Combusken then into Blaziken.

Torchic is a fire type starter Pokemon, or in Japanese it is known as Achamo. Its ability is Blaze, that is where it raises the power of Torchic’s Fire-type attacks by 1.5x while Torchic has less than 1/3 of its max HP (rounded down). It can learn moves as strong as flamethrower, firespin, and peck. Torchic evolves into Combusken at level 16 and then into Blaziken at level 36. Its weaknesses are water and ground Pokemon.
END_OF_DOCUMENT_TOKEN_TO_BE_REPLACED

We all see it. Pokemon cards that are the most highly coveted cards for collectors. So why these cards? Why not, say, Nidoqueen (EX FireRed LeafGreen #9/112)? Nidoqueen is a rare holofoil card. No. There is something that churns the Pokemon card hysteria, other than whether a card is rare or uncommon or common. The cards that are frequently fussed over include but are not limited to:
-Lugia ex (EX Unseen Forces #105/115) HF
-Wailord ex (EX Sandstorm #100/100) HF
-Espeon Gold Star (POP 5 #16/17) HF
–Charizard ex (EX FireRed LeafGreen #105/112) HF
END_OF_DOCUMENT_TOKEN_TO_BE_REPLACED

Of all the generations, the third has some of the best shiny Pokemon, and most of my personal favorites come from here. Both rare and common characters have had good luck with their shiny form colors, and one of the best was even turned into an event.

Milotic was given out as a shiny event in 2008 and 2009 during the yearly Video Game Championships. Japan had this event at the end of 2008 and it was only available to Platinum games. It was available in Europe and the United States during the first half of the year and was only available on certain days due to the dates of the tournaments. Its shiny form is a very nice change from regular, and the red and gold of the tail go together nicely.
END_OF_DOCUMENT_TOKEN_TO_BE_REPLACED

I started collecting Pokemon items in 1999 when it first started to
hit the UK and become a craze. Despite the popularity, merchandise
levels started to fall within less than 3 years and it became harder
and harder to find items. The Pokemon games released every few years
would kick start the craze again but the UK never got as wide a
variety of merchandise as Japan.

When I started doing more shopping online, I began to find a variety
of sources for collecting more hard to find and exclusive items. The
biggest and perhaps most well known place to look is Ebay – with users
all over the world buying and selling collectibles (some so rare that
they can go for thousands of pounds sterling/dollars). Despite being
the biggest resource it can also be difficult to distinguish items
that are the real deal from fakes. I generally try and stick to buying
items from sellers that are located in Japan rather than say China to
try and avoid possible bootlegs.
END_OF_DOCUMENT_TOKEN_TO_BE_REPLACED