Hey guys! I’ll be summarizing and reviewing the 22nd episode—A Venipede Stampede—of Pokemon Black and White. The episode starts off with Team Rocket, Pierce, and Dr. Zager inside their blimp examining the meteonite. It glows yellow as it gives off strong pulses of electricity. The introduction song plays and our heroes have finally arrived at Castelia City. Iris and Cilan take in the scenery and recommend that they go to Castelia Cone for some sweets. Ash, with a determined look on his face, intervenes to head to the Castelia Gym first. They take walk through the city and bump into Burgh who is looking worriedly at a tree. He says that the bug Pokemon are behaving strangely and that he must attend to them before he can battle. They head over to Castelia Cone, but are disappointed to see that it is closed. Pikachu notices a weird-looking manhole and the group decides to go down it.

They go farther down the sewers when they spot a Venipede trapped inside a pipe. Ash finds it and wants to pull it out, but Burgh warns that he may get poisoned due to its ability, Poison Point. All of a sudden, he pulls it out and the startled Venipede uses Screech in fear. He tries to calm it down and eventually earns its trust, but is poisoned in the process. Cilan whips up an antidote and cures him as well as using a potion on their new bug friend. Iris also helps out by giving it a delicious Oran Berry. Moments later, they are startled to find a huge herd of Venipede crawling through the sewers. The herd angrily attacks them and they are forced to run. They resurface, only to find that the Venipede colony is attacking the entire city. Officer Joy arrives on the scene and tells our heroes to get out of the city and that Professor Juniper is looking into the disaster. An explosion occurs in the distance at the Pokemon Center and they decide to go there. Several trainers defend the Pokemon Center, including Trip, who sends out Lampent. It along with Pignite, Darmanitan, and Pansear proceed to use Flamethrower on the massive colony. Ash intercedes and gets in an argument with Trip. The mayor arrives and allows Ash, Iris, and Cilan to help Burgh in his plan to gather all the Venipede in Central Plaza.

The group goes to the city and Burgh attempts to reason with the leader, but Trip follows them and tries to knock it out. Ash takes a hit for the leader which prompts the injured one to vouch for him. The Audino he requested for arrives with Nurse Joy and proceeds to heal the colony. Burgh then takes out his flute and plays a melody that attracts the colony to follow him. The others are assigned to assist with any stragglers. For this task, Ash sends out Pidove, Axew helps, and so does Pansage. Even Trip helps out and in doing so, possibly motivated Pidove to evolve.

Professor Juniper and her team locate an unknown energy source centering at the Desert Resort. Ominous music plays as the scene switches to Giovanni in a jet. The day turns to night and everyone successfully gets the Venipede colony into the Central Plaza. The mayor and the townspeople express their thanks. Juniper arrives via plane and explains her findings to the others. She heads out to the Desert Resort to investigate. The end.
END_OF_DOCUMENT_TOKEN_TO_BE_REPLACED

When the games first came out, I wasn’t particularly fond of the elemental monkeys. There was something to their design that just struck me as wrong. Though now, after having used them in the games, I’ve come to the conclusion that they are really useful and come in handy when trying to advance in the beginning of the game’s plot.

Pansage is known as the Grass Monkey Pokemon. Like its name would suggest, it is based off from monkeys, though also holds some physical resemblance to plants. It has green ‘pants’ and its tail has two leaves. Its upper torso, arms, and lower half of its face is a sandy, yellow color. The upper half of its face and the outside of its ears are the same shade of green as its tail and ‘pants’. Atop its head, though, appears to be a sort of broccoli-like plant. Its hands resemble mittens, and lack actual fingers. According to its pokedex entries, Pansage dwell deep in the forest. It shares the leaves on its head with weary-looking Pokemon. By eating them, the leaves are known to relieve stress and whisk weariness away as if done by magic. Pansage and its evolution are the only non-starter Pokemon to have the starter-exclusive ability, Overgrow. It is also the only Pokemon able to learn the move Grass Knot by leveling up. The ‘pan’ in Pansage’s name comes from “chimpanzee” the ‘sage’ in it most-likely refers to the sage plant. Because it is also a part of a trio, it may be a reference to the “three wise monkeys” tale.

Pansage is only able to evolve into its final form, Simisage, if exposed to a Leaf Stone. Simisage, like Pansage, appears to have characteristics of both monkeys and plants. Also like Pansage, it appears to be wearing green pants. Simisage is about a foot taller than it’s pre-evolution, though appears to be much more ‘aged’. It has fluffy white eyebrows and its features are much more defined. It has fingers and toes, as well as white shoulder pads. Its arms, ‘hair’ and outside of its ears are the same shade green as its tail and ‘pants’. According to its pokedex entries, Simisage tends to be ill tempered. It attacks and defends itself by swinging its thorn-covered tail wildly about (that’s probably why Simisage is known as the Thorn Monkey Pokemon). The leaves on its head are said to be very bitter. Simisage appears to be based off from a monkey and a tree. Because of this, it could be based off from legends of monkey trees, or a pun on leaf monkeys. Its name may be a combination of the words ‘simian’ (considered “higher primates” and are known to most as being Old World monkeys and apes) and ‘sage’.

There is a new lifesize plush toy released in Japan. This time it is Pansage, or Yanappu as it is referred to in Japanese. This Pokemon plushie is huge. It measures 25″ (64cm) tall and 20.5″ (54cm) wide. Far bigger than any other Pansage plush toy made to date. 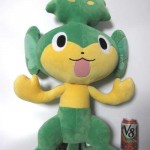 You can see it here next to a can of juice for a size comparison. This is the 5th lifesize plushie to come out from the generation V character series. The other lifesize plush were Oshawott, Tepig, Snivy and Scraggy.
END_OF_DOCUMENT_TOKEN_TO_BE_REPLACED

Two starters in a row. I think we can all tell what comes next! First the water typed Oshawott, and then the fire typed Tepig, all that’s left is the grass typed Snivy. But that’s something for another episode. Last time, Ash entered a town, thinking it was Striaton, only to find that it was actually the Gymless Accumula. This episode, we waste no time, and see that it is in fact Striaton he’s seeing. Looks like we’re in for a gym battle! Introductions aside, it’s time for a play-by-play review.

Warning, the following WILL contain spoilers.

I recommend you watch this series on your own, but if you’re in a hurry, want another opinion, or just don’t feel like watching, this will be quick, and to the point without losing the details.
END_OF_DOCUMENT_TOKEN_TO_BE_REPLACED

The Pokemon Center in Fukuoka, Japan has just moved to a new location. The Grand Re-Opening is on March 3rd, but I managed to get a pre-opening invitation, so I was able to get the new Pokemon items a day early. This promotion was very similar to the Osaka one last year. There was plushies, a pin badge, keychain, clear folder a pillow and some large size stickers. I was kind of disappointed that there was no charms, but the plushies are very cool, so it made up for it. END_OF_DOCUMENT_TOKEN_TO_BE_REPLACED